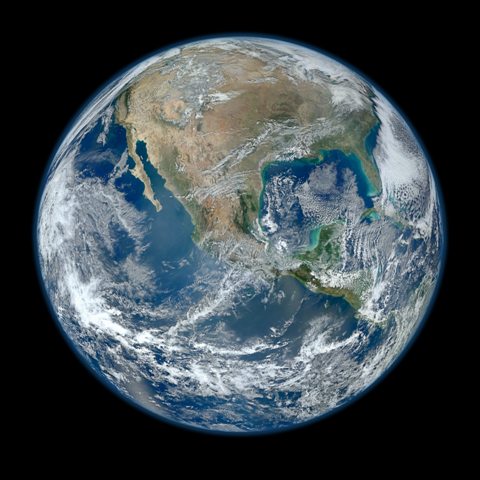 The European Union is finalizing plans for an ambitious “digital twin” of planet Earth that would simulate the atmosphere, ocean, ice, and land with unrivaled precision, providing forecasts of floods, droughts, and fires from days to years in advance. Destination Earth, as the effort is called, won’t stop there: It will also attempt to capture human behavior, enabling leaders to see the impacts of weather events and climate change on society and gauge the effects of different climate policies.

“It’s a really bold mission, I like it a lot,” says Ruby Leung, a climate scientist at the U.S. Department of Energy’s (DOE’s) Pacific Northwest National Laboratory. By rendering the planet’s atmosphere in boxes only 1 kilometer across, a scale many times finer than existing climate models, Destination Earth can base its forecasts on far more detailed real-time data than ever before. The project, which will be described in detail in two workshops later this month, will start next year and run on one of the three supercomputers that Europe will deploy in Finland, Italy, and Spain.

Destination Earth rose out of the ashes of Extreme Earth, a proposal led by the European Centre for Medium-Range Weather Forecasts (ECMWF) for a billion-euro flagship research program. The European Union ultimately canceled the flagship program, but retained interest in the idea. Fears that Europe was falling behind China, Japan, and the United States in supercomputing led to the European High-Performance Computing Joint Undertaking, an €8 billion investment to lay the groundwork for eventual “exascale” machines capable of 1 billion billion calculations per second. The dormant Extreme Earth proposal offered a perfect use for such capacity. “This blows a soul into your digital infrastructure,” says Peter Bauer, ECMWF’s deputy director of research, who coordinated Extreme Earth and has been advising the European Union on the new program.

Typical climate models run at resolutions of 50 or 100 kilometers; even top ones like ECMWF’s “European” model run at 9 kilometers. The new model’s 1-kilometer resolution will enable it to directly render convection, the vertical transport of heat critical to the formation of clouds and storms, rather than relying on an algorithmic approximation. “I call it the third dimension of climate modeling,” says Bjorn Stevens, a climate scientist at the Max Planck Institute for Meteorology. The model will also simulate the ocean in fine enough detail to capture the behavior of swirling eddies that are important movers of heat and carbon.

In Japan, pioneering runs of a 1-kilometer global climate model have shown that directly simulating storms and eddies leads to better short-term rainfall predictions. But it should also improve climate forecasts over periods of months and years. Recent work has shown climate models are not capturing predictable changes in wind patterns that drive swings in regional temperature and rainfall—probably because the models fail to reproduce storms and eddies.

The high resolution will also enable Destination Earth to base its forecasts on more detailed data. Weather models suck in observations of temperature and pressure from satellites, weather stations, aircraft, and buoys to guide their simulations. But coarse grids mean the models can’t assimilate measurements that don’t average well or cover broad areas, such as fractures opening up in sea ice. Destination Earth will close this gap, says Sandrine Bony, a cloud scientist at the Pierre Simon Laplace Institute. “The scales that are resolved are closer to the scales that are measured.”

The model will also incorporate real-time data charting atmospheric pollution, crop growth, forest fires, and other phenomena known to affect weather and climate, says Francisco Doblas-Reyes, an earth system scientist at the Barcelona Supercomputing Center. “If a volcano goes off tomorrow, that’s important for the risk of tropical precipitation failure in a few months.” And it will fold in data about society, such as energy use, traffic patterns, and human movements (traced by mobile phones).

The goal is to allow policymakers to directly gauge how climate change will impact society—and how society could alter the trajectory of climate change. For example, the model could predict how climate change will affect agriculture and migration patterns in Brazil—and also how cuts in ethanol subsidies might limit deforestation in the Amazon. Currently, climate scientists extract regional results from global climate models and pass them to experts in agriculture or economics to understand effects on human behavior. Now, says Erin Coughlan de Perez, a climate hazard scientist at the Red Cross Red Crescent Climate Centre, modelers are “moving from just forecasting what weather will be, to what the weather will do.”

Getting there won’t be easy. Exascale supercomputers rely on both traditional computer chips as well as graphical processing units (GPUs), which are efficient at handling intensive calculations. GPUs are good for running model components in parallel and training artificial intelligence algorithms—two techniques Destination Earth will lean on to enhance performance. But old climate modeling code will have to be reworked. ECMWF has a head start: It is adapting its forecast model to a GPU-based environment, and last year tested it at 1-kilometer resolution for 4 simulated months on Summit, the U.S. supercomputer that was the world’s fastest until a Japanese machine recently eclipsed it.

The massive amount of data generated by the model will be a problem of its own. When the Japanese team ran its 1-kilometer-scale experiment, it took half a year to extract something useful from a couple days of data, Doblas-Reyes says. “There’s a bottleneck when we try to access the data and do something clever with it.” A big part of Destination Earth will be solving this problem, designing ways to analyze model results in real time.

As an operational system, Destination Earth will likely run at several time scales, Bauer says. One will be near daily, perhaps targeting individual extreme weather events weeks or months in the future. Runs in the other mode—long-term predictions—would be less frequent: perhaps a decadelong prediction of the climate made every half-year or so. “If this works, it could be a template for other countries to follow,” Bauer says.

The Europeans aren’t alone in planning for exascale climate models. “We’re heading in that direction as well, but we’ve yet to reach that level of effort,” says Leung, who serves as chief scientist for DOE’s earth system model.

Stevens says it’s thrilling to be involved in a truly planetary-scale information system that can reveal not just the proverbial butterfly effect in weather and climate, but also how local human actions manifest globally. “That’s the story of globalization. That’s the story of the Anthropocene. And this is the scientific platform that will allow you to explore those.”